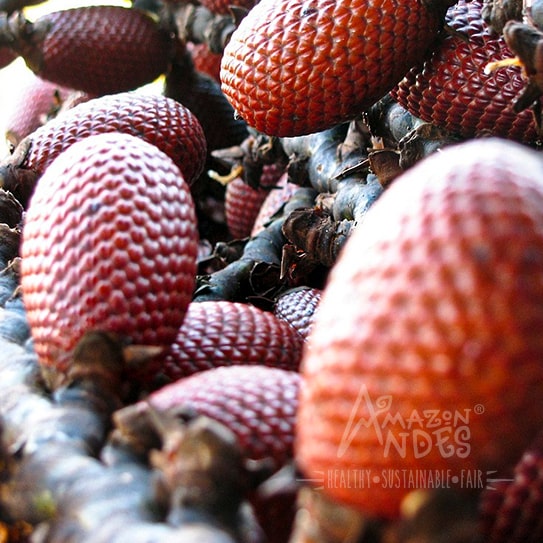 AGUAJE
Aguaje supplier from Peru, we offer aguaje products in bulk and wholesale prices for importers and distribuitors, we are suppliers of the best raw material from Amazon Andean zone in Peru. We are haccp and GMP certificates. FAcilities FDA certified.

EOM service or private label in vegan capsules, tablets, oil and powder service is avaliable, if you are looking a reputable aguaje supplier
Contact Us
ORIGIN OF AGUAJE OR BURITI
Aguaje Palm (Mauritia flexuosa Lf) also called burity or moriche, is distributed throughout the Amazon Basin and also in Trinidad and Tobago, representing over 35% of the entire territory of South America. The Amazonian native people call it the “tree of life” due to its many health benefits. The aguaje represents a non-timber forest resource, of enormous potential in the South American region because, in addition to its wide distribution, it be exploited in all its parts (from its roots to its shoots) for a variety of uses and applications such as: food, beverages, construction, decoration, utensils and other objects of daily use.

For example, in Peru, where it is estimated that 50,000 families are linked to trade associated with Aguaje. In Venezuela, indigenous people used the dry mass as bread; in Brazil, the largest food source during times of flooding to coastal populations, Estado do Pará, receives support from the aguaje and in Ecuador, the aguaje plays an important role in feeding the native populations.

According to researchers at the IAAP (Research Institute of the Peruvian Amazon in Iquitos), palm (Mauritia flexuosa) is a rich source of energy and nutrients, which contains one of the highest plant sources of vitamin A and carotenoids – with amounts five times higher than carrots, buriti pulp also contains ascorbic acid (Vitamin C) of 50-60 mg / 100g, contains phytoestrogens and oleic acids which are important in human nutrition especially of women and especially in the menopause. Other Peruvian food composition studies indicate that aguaje contains 706 micrograms of retinol (form of vitamin A), a null contribution of vitamin C and a caloric tenor of 283 calories per 100g pulp and approximately 50% water.

The quality of our products reflect the complete organic process of aguaje; beginning with our growers in the amazon zone(Pucallpa and Iquitos in Peru).

Traditional use of Aguaje 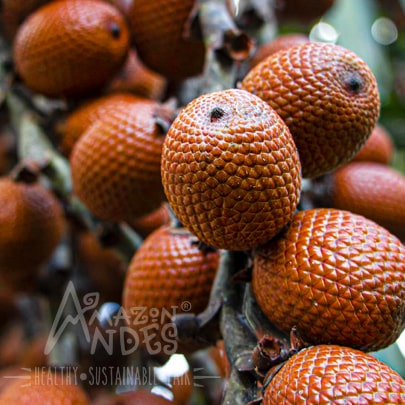 BENEFITS OF AGUAJE OR BURITI

REJUVENATES AND FIGHTS FREE RADICALS
1
Being a great natural source of this pigment carotene is converted to vitamin A in the body and it becomes one of the most potent antioxidants there, i.e. delaying the deterioration of cells and tissues, keeping young people and their functions optimal. Carotene acts destroying free radicals, unlike vitamin E, which is responsible for preventing the appearance of beta-carotene free radicals, to the help the very effective action of vitamin E, and it is essential for regeneration and the health of cells and tissues.
FIGURE MODELER
2
The aguaje can act as a modeler of the female figure by the presence of sit sterol which may be a precursor of female steroid hormones type.
MAINTAINING VISION, SKIN, MUCOUS MEMBRANES AND BONES
3
Due to its beta-carotene it’s a precursor of vitamin A, it also helps the immune system to function properly because of the content of vitamin C, vitamin E and carotenoids possessing high antioxidant activity and promoting the immune system.

USE OF AGUAJE OR BURITI

This dose is safe to be produced from dehydrated and micro pulverized the fruit of the palm (Mauritia flexuosa) pulp, the same featuring studies of safe use in beverages, such as fruit powder.

From time immemorial, the native population made multiple use of this palm, especially the Achuar people of the Peruvian Amazon, whom consume the fruits whose flesh is highly nutritious and contain proteins, fats, vitamins and carbohydrates.

It is eaten fresh or used directly to produce drinks like carato moriche and even to make a nougat candy called moriche; and also to extract oil.

SIDE EFFECTS AND CONTRAINDICATIONS OF AGUAJE

Have not been done to date, but studies on the possible toxic effects of aguaje because it is a fruit of millennial consumption in the Amazon which validates its safe use, however it is known that the phytoestrogens in general may inhibit the tyrosine kinase receptors, so that antagonizes the effects of insulin in insulin dependent tissues, with a possible development of the resistance to the action of insulin.