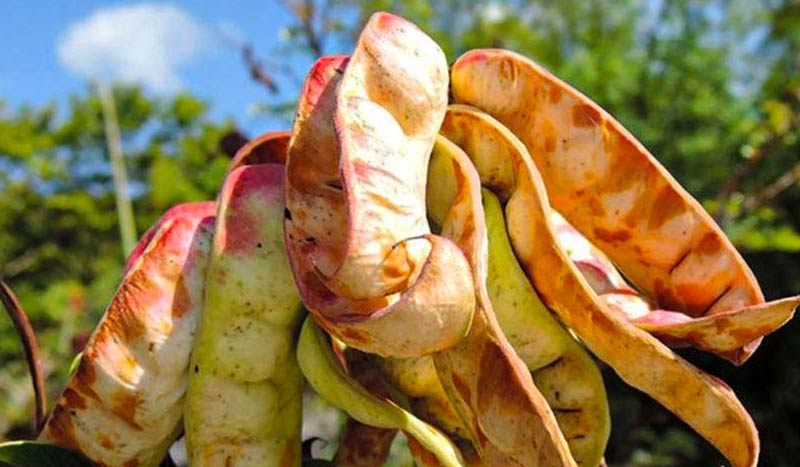 Tare, also known as Taya, whose scientific name is Caesalpinia spinosa, is a tree that belongs to the legume family.

It is native to the Andes, used since pre-Hispanic times in folk or folk medicine. It is distributed from Venezuela to the north of Chile. In Peru it develops in forests and thickets of arid and semi-arid zones of coastal hills and of the inter-Andean valleys. It is distributed in almost all the coast, from Piura to Tacna, and in some departments of the mountains.

3000 years ago, pre-Inca cultures used tare pods, which have a high percentage of tannin, beaten with iron, as a black dye for the dyeing of garments that still retain their color despite the passing of the centuries.

The tare also has food, wood, fuel and medicinal applications, the latter given by the astringent properties of its pods.

Currently, the most widespread uses for its economic importance are that of its dry pods to obtain tannins for tanning hides and that of its seeds to obtain gum as a food additive.

INTEGRAL USE OF TARE

Tare is found in the wild and has immense medical, nutritional and industrial potential, being highly useful for the production of hydrocolloids or gums, tannins and gallic acid, among others.

In addition, it is used in soil protection, especially when irrigation water is not available, in order to give good protection to many lands that are currently in the process of erosion and for commercial purposes.

The use of the fruits allows to obtain numerous products of interest. The pod represents 62% of the weight of the fruits and is the one that precisely has the highest concentration of tannins that ranges between 40% and 60%.

Tare flour or powder, which results from the grinding of its dry pods, can have up to 60% tannins.

– Tanner. Due to its high tannin content, it is used for leather tanning, converts putrescible and permeable protein skin into rot-resistant leather. It is a natural product that replaces toxic heavy metals that are used in traditional tannery, and whose residues contaminate water courses.

– Medicinal. It works against tonsillitis by gargling with the infusion of mature pods and as a healing agent when washing wounds with said infusion. In addition, the tare is used against stomatitis, the flu and fever.

– Tint. The tare pods contain a substance called tannin, which is used to dye black. The roots may turn dark blue.

– Pesticide. The cooking water from dry pods is effective against lice and insects.

– Pharmaceutical industry. Tannic acid has an astringent and styptic (hemostatic) reaction. They are used outdoors as a hemostatic in hemorrhages and their most important application is in the treatment of burns. To prepare the medicinal derivatives of acid, such as tanalbin, the protan that is the almost innate tannin used as anti diarrheal. Also the tonoform and the aldoform. As part of gastroenterological drugs, to heal ulcers; Healing agents, due to their astringent, anti-inflammatory, antiseptic, antidiarrheal, antifungal, antibacterial, antiscorbutic, dental and antidisenteric effects, with those that produce constriction and dryness being used the most.

– Beer and wine industry. They are used to clarify beer and wines by virtue of their property of precipitating the albuminoid substances they contain, due to the fact that it contains tannins.

– Food industry. It is used as preservatives and antioxidant to preserve fish, shellfish, fishmeal (due to gallic acid, tannin from the tare), as well as post-harvest fruits and vegetables, as well as a natural antioxidant for the sausage, oil, fat and cookie, chocolates, etc. Tannins in tare powder are also used in wine clarification as substitutes for malt to flesh out beer.

The seeds for forage use have in their percentage composition by weight 28% of husk, 34% of gums and 37.5% of germ (almond) as a very high content of proteins of great concentration of good quality methionine and tryptophan, fats and oils that It could be used for human consumption.

From this part of the product, oil, gum (powder to give consistency to ice creams), protein powder and derivatives such as: soaps, paints, varnishes, enamels, printing dyes, butter and edible margarines are obtained, since they have a content of free acids 1.4% (oleic acid) is commercially acceptable for its low acidity.

From the seeds, a food grade gum from the endosperm is obtained through a thermal-mechanical process, constituting an alternative to traditional gums in the world food industry, paints, varnishes, among others.

In food. Used as a binding and / or stabilizing agent, with emulsifying and binding capacity, therefore it improves and maintains the texture of food. Induce gelation and stabilize foams.

It is included in the production of ice cream, fruit preparations, yogurt, sauces and condiments, desserts and meat-based products. It is also used to thicken casseroles, give “body” to beers and even maintain the humidity of fresh cheeses. In addition, the pharmaceutical, cosmetic, paper and textile industries are used.

In cosmetics. It is highly renowned by the cosmetics industry for having emulsifying and adhesive properties. They are used in lotions and creams.

It is used to prepare balanced for animals, such as cattle and guinea pigs.

It contains a high percentage of proteins and amino acids, as well as methiotine and tryptophan, oils and fats that aid in digestion, can be used as food in humans. It is also tannin free.

It can be used in veterinary products as a hepatoprotector and aid to the central nervous system, as well as feed for cattle.

– Cosmetic. The decoction of the leaves is used to prevent hair loss.

The wood, although it usually does not reach large proportions, is of good quality and is used in carpentry and construction; also for the elaboration of the traditional agricultural tool; it is appreciated as firewood

Wood is used to make beams, joists or chaklas, to build houses; good quality tillage tool handles and fence posts, as well as firewood and charcoal due to its calorific benefits.

USES OF THE TARE GERM:

In the Baking and Pastry Industry in the manufacture of cookies and sliced ​​bread, biscuit, cakes, biscuits, pies, etc.