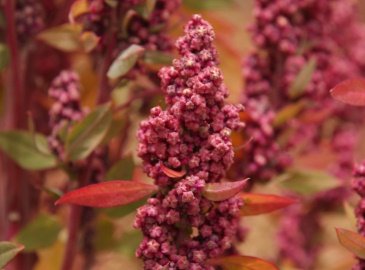 Quinoa or quinua(Chenopodium quinoa) is an Andean plant that originated around Lake Titicaca in Peru and Bolivia, was cultivated and used by pre-Hispanic civilizations and replaced by cereals on the arrival of the Spaniards, despite being a staple part of the population’s diet of that time. The available historical evidence suggests that domestication by the people of America may have occurred between 3000 and 5000 BC.

There are archeological findings of quinua in the tombs of Tarapaca, Calama and Arica in Chile, and in different regions of Peru. Upon arrival of the Spaniards, quinoa was an appropriate technological development and widely distributed in the Inca territory and beyond.

The first Spaniard to report about this andean grain was Pedro de Valdivia, who’s observed cultures and Concepcion’s, he mentions that, among other plants, the Indians also grow quinua for food. Garcilaso de la Vega describes in his actual comments that the quinua plant is one of the second most abundant grains grown on the face of the earth, he said that quinoa resembles something like  small millet or rice and refers to the first shipment of seeds to Europe, which unfortunately arrived dead and unable to germinate, possibly due to the high prevailing humidity during the voyage by sea. Subsequently, Cieza de León in (1560) indicates that quinoa is grown on the highlands of Pasto and Quito, mentioning that in those little cold lands there was an abundance of corn planting quinua.

Patiño in (1964) also mentions in their reviews about La Paz, he speaks of quinua as a plant that served as food for the indigenous,  (Espada, in 1885, II, 68) and finally Humboldt, visiting Colombia, indicates that Quinoa has always accompanied the inhabitants of Cundinamarca.

The quality of our products reflect  the complete organic process of quinua cultivation ; beginning with our growers in the highlands of Peru’s Valleys.

we offer quinua(white, red and black) products in bulk and wholesale prices for importers and distribuitors, we are suppliers of the best raw material from Amazon Andean zone…please contacts us

Traditional use of quinoa

The quinoa grain has various uses to combat liver disease, angina and cystitis. It is a dental analgesic and has the quality of being anti-inflammatory and healing, so they would apply black quinoa as poultice, combined with some other plants, to heal bone fractures. Its fruit contains a fair amount of alkaline substances and is used as a remedy for sprains, fractures and dislocations, making a brandy mixed with alcohol or pasta. The studies found tell of the many nutritional properties of quinoa, among which lysine, an amino acid not found in plants and is essential for health and energy; calcium, phosphorus, iron and magnesium, minerals that help to have a strong and healthy skeletal system; phytoestrogens indicated for the treatment of osteoporosis; and lithium avoiding stress, sadness, grief and depression. A 100gr of Quinoa contains nearly five times that of lysine , more than twice that of isoleucine, methionine, phenylalanine, threonine and valine, and leucine higher quantities (all with the essential amino acids tryptophan) compared with 100 grams of wheat. Furthermore it exceeds in some cases by the triple-quantities in histidine, arginine, alanine and glycine and contain amino acids not present in wheat like proline, aspartic acid, glutamic acid, cysteine, serine and tyrosine (all nonessential amino acids). Its medicinal properties were likewise highly prized by the ancient Andean people in treating various ailments and diseases. For liver abscess, for liver diseases of various kinds, such as dental analgesic, anti-angina, inflammatory, catarrh of the urinary tract, Worming was called paico, Stems from the ash of (llipta) is added to foods to avoid fullness (bloating) and as a substitute for lime chewing coca (Christ, 1995) is obtained. Because of its high nutritional and medicinal estimated part of the sacrifices offered to the huacas.

Contains amino acids
Lysine, this improves immune function and promotes the formation of antibodies and cellular repair.
Improves intestinal transit
It contains plenty of fiber, this makes our digestive system function properly and digest food and discard waste.
Rich in proteins
Quinoa "contains 7.1 grams of protein per 100 grams. This provides twice as containing other cereals such as rice or wheat," the nutritionist Maria Carvajal Elcomercio.com.
It contains low fat
This is what makes it a recommended food by nutritionists as a food supplement; even the pre-Columbian Indians compared it with the nutritional value of breast milk.
It is high in calcium
Even more than corn and rice, and being quickly absorbed by the body, its consumption helps prevent osteoporosis decalcification and reported Dsalud.com.
Quinoa is considered a super food
that is even used by vegetarians to supplement the benefits of meat because it contains protein, vitamins and many minerals like iron, magnesium and calcium.
Ideal Balance
The United Nations Food and Agriculture Organization (FAO), said that "it holds the balance of proteins closer to what would be the ideal supply of nutrients for a human being."
Ideal for diabetics
Because of its low sugar content, it is advisable for diabetics and for those who wish to lose weight, including it in your daily diet.

Side effects and contraindications of quinoa:

Quinoa is possibly the safest food because its seeds have been used in large amounts in food, for thousands of years; Quinoa is usually rinsed after being harvested and before preparing it, take the natural cover of saponins that have seeds. No reports are available with regard to the adverse effects of quinoa.

Quinoa, How to Use:

Before consuming they need to wash with liquid soap to eliminate the chemical elements (saponina) normally attached to the shell.. After washing you can prepare the grains for delicious dishes with salt or fresh, solid or liquid (Prieto, 1996). It is eaten like rice, beans; their tender leaves are eaten cooked as chard and also spinach; its stem and green leaves are used as salad; plus soups or porridges were made; with flour, also muffins and cookies are made; chicha was also prepared with sweet liquid mishque or nag. Also you can use its roots.

To start using the quinoa is important to pre-wash the seeds, rub lightly with your hands under the water, so that saponins are removed.

We must be careful because of the smallness of the seeds, we can do this operation on a screen, we should not soak, but only wash and rinse .

Then we boil like rice, for about 15-20 minutes or until the seeds are opened then Strain and they are ready to use.

The quinoa has different presentations according to their different processes, but has proven effective in each use.